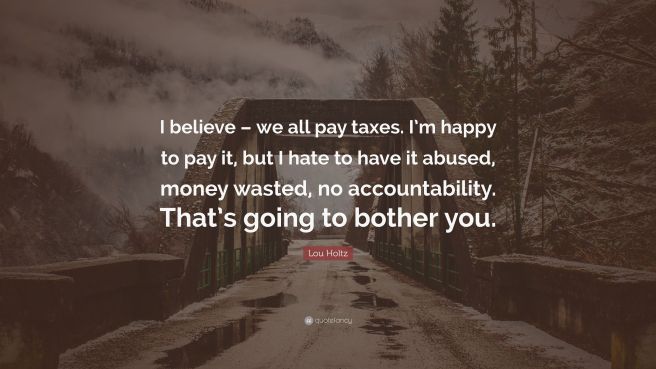 Taxes…a word that inspires much discussion and emotion. “The rich don’t pay enough!” “My taxes are too high!” “We need to hike taxes to pay for the things we need!” Personally, I think two things: taxes are too high and we need to pay taxes. In the world of big government politics, though, those who oppose excessive taxation as seen as irrational and irresponsible promoters of fear and hatred of government. This is the hyperbolic rhetoric often employed by big government advocates who wish to pick the pockets of tax payers indiscriminately without accountability—and accountability is the key word here. It is not an accurate characterization.

All taxation should be accompanied by accountability. Elected officials, at all levels of government, are much too quick to believe that more taxes is always the right solution and any tax cuts hurt the poor. I reject such a argument. When it comes to raising taxes—or maintaining the current tax base—the following four questions must be asked: Do we need them? Are they cost effective? Does the public consent? Is the government responsibly spending what they have already been given? If the answer is no, responsible elected officials should be opposing them.

Asking these questions is not promoting fear and hatred of government. It is demanding and expecting accountability for what is being done with the money that the government has already been given. Consenting to taxation is the highest form of trust a citizen can give to its government. Citizens should expect their government to honor that trust with the highest integrity and diligence.

With that trust comes an expectation that our elected representatives will carefully evaluate, via those four questions, anything funded—or suggested to be funded–with tax payer money without having to be accused of “cutting off basic services” to our children, or other inflammatory charges. It is fair to ask if government spending—for whatever reason—is necessary, cost effective, consensual, and efficient before we allow our elected representatives to expect us to pay more.

It is misleading to suggest that every opposition to new taxes—or proposed tax cuts for existing taxes—must result in the “loss of essential services” because of some perceived need the government must meet and every tax or tax hike ensures its protection. It is, however, necessary to ask where savings can be made before government at any level complains it “needs more money.” We should be suspicious of assurances that there is no waste, mismanagement, or redundancy in government that cannot be eliminated to reduce costs before taking more from taxpayers.

Taxpayers should be asking why it is always them who are expected to do more with less—never government. To ask our elected officials it is Mainers who must cut their household budgets, neglect their family priorities, and restrain their pursuit of happiness. Government? No way, there is not a penny to be saved anywhere, or so they tell us. If you force them to cut their budgets, they threaten to put people out on the street. Tax increase are good; tax cuts are bad, right?

We should not believe it. I refuse to believe that savings cannot be found in state government agencies without resorting to such threats in hopes they will protect their ever-expanding budgets via their subtle emotional extortion. In this more likely scenario taxes are bad. They keep the government from accountability and efficiency.

Every penny of taxation an American gives to the government results in a penny of lost freedom—the freedom to use the fruits of our labor to fund our own family priorities and pursuit of happiness. It matters not the income bracket that tax money comes from. Sometimes the loss of income to American families—and the accompanying hardship which comes from it—outweighs the benefits expected from the tax. This should oblige our elected representatives to say, “No, we will not burden American families with this tax.” That is accountability. That is diligence. That is a representative who looks out for the welfare of his/her constituents.

Those who advocate such an approach are not promoting fear and hatred of government. They are advocating responsible management of what is entrusted to government—i.e. the hard earned money of ALL Americans. After all, everything government gets comes from the earnings of someone else. They demand that the government exhibit the fiscal discipline we must exercise in their own homes. We, the people, cannot go to our employers and force them to give us raises to help us out of financial hardships—however they arise. We must make hard choices: eat out less, disconnect cable, work a second job, or a host of other difficult options.

Our elected representatives are supposed to be a layer of protection for the tax payer, ensuring our government is making the same tough choices that all Americans have to make. We should expect it. Dare I say, we should demand it. Government must make hard choices—and ask tough questions—before enacting more confiscatory taxes that hurt American families, especially when they hide behind the overused do-gooder excuse “But it’s for your own good!”

What is good for America? Representatives who will step in and advocate for the tax payer by measuring results over good intentions—cost versus benefit. Representatives should to stand up for us—not quietly lay down their heads while the government continues to operate without needing to show results, efficiency, necessity, or public support.

It is not always the popular thing to do. I am sure my children would not like it if I disconnected cable television—but it would be necessary if the family good required it. I applaud our representatives who take principled stances on tough fiscal questions, even if they are unpopular. I applaud President Trump’s tax policy as a way to put Americans first and government second. Let’s hope this trend continues.

We must unapologetically confront our societal challenges with moral clarity, with--as the founders said--a “firm reliance on the protection of Divine Providence.” Tim Lajoie is a graduate of Boston Baptist College, Liberty University, and Liberty Baptist Theological Seminary. He lives in Lewiston, Maine. A U.S. Coast Guard veteran, Tim is a retired law enforcement professional with 30 years experience in law enforcement and corrections, with over 10 years in various management capacities, ending his career as a sergeant. He now works in EMS communications and serves as a police chaplain. He also does private consulting. He has earned a M.A. in Management/Leadership Studies, M.S. in Criminal Justice, and M.A. in Theological Studies. He has completed doctoral coursework in theories of crime. He is a former adjunct professor of social sciences and a former Lewiston, Maine city councilor. He has been married 30-plus years to his college sweetheart, he has two grown children (daughter and son), and five grandchildren. View all posts by Tim Lajoie