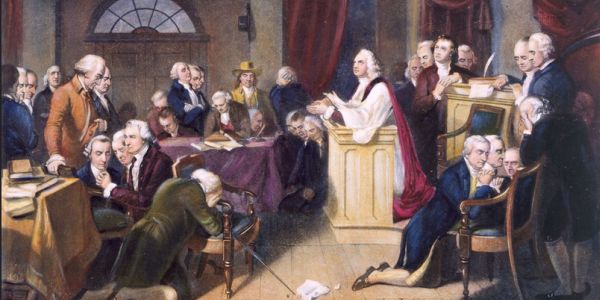 There was a time when America looked to its houses of worship and preachers of righteousness for guidance. Today too many Christian leaders will not speak with a moral voice to political issues, condemn corrupt leaders, or endorse political candidates who espouse our values.  Our government has intimidated them into silence, denying our citizens a much needed moral compass. It has been replaced instead with a vacillating standard of morality that is based on whatever direction the prevailing political wind is blowing.  As a result, we elect enemies of our common virtue.

A moral government founded in religious principle is our heritage.

John Jay, the first chief justice of the U.S. Supreme Court said, “Providence has given to our people the choice of their rulers…” and he emphasized that we must exercise that choice by electing people who reflect our values and reflect our morality.  He was very specific…he said we should elect and choose Christians for our rulers.  That is what he believed true moral government was.

We are finding more and more that our government no longer reflects our values.

But we must come to realize that we put them in office, we voted for them, and we are reaping the consequences of our actions.  We have been fooled into believing that certain party platforms are moral and we should vote for all who belong to that party.

Speaking for myself, I have been fooled one too many times to believe that anymore, friends.  I find my values in the Holy Bible, not a party platform.  I will not vote for anyone who does not reflect them, even if that means leaving a ballot blank…and I will trust in God for the outcome.

“And let us with caution indulge the supposition that morality can be maintained without religion. Whatever may be conceded to the influence of refined education on minds of peculiar structure, reason and experience both forbid us to expect that national morality can prevail in exclusion of religious principle.”

Welcome to blog and podcast of Tim Lajoie. We must unapologetically confront our societal challenges with moral clarity, with--as the founders said--a “firm reliance on the protection of Divine Providence.” Tim Lajoie is a graduate of Boston Baptist College, Liberty University, and Liberty Baptist Theological Seminary. He lives in Lewiston, Maine. A U.S. Coast Guard veteran, Tim is a retired law enforcement professional with 30 years experience in law enforcement and corrections, with over 10 years in various management capacities, ending his career as a sergeant. He now works in EMS communications and serves as a police chaplain. He also does private consulting. He has earned a M.A. in Management/Leadership Studies, M.S. in Criminal Justice, and M.A. in Theological Studies. He has completed doctoral coursework in theories of crime. He is a former adjunct professor of social sciences and a former Lewiston, Maine city councilor. He has been married 30-plus years to his college sweetheart, he has two grown children (daughter and son), and five grandchildren. View all posts by Tim Lajoie