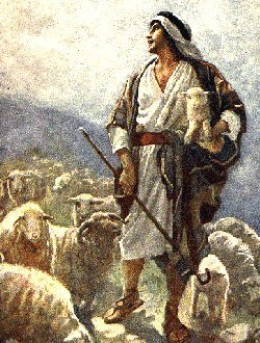 David’s example of leadership is found exemplified in Luke 6:10a, “He that is faithful in that which is least is faithful also in much….” David’s ascent from shepherd to king of Israel begins with him caring for the least of creatures to caring for God’s chosen people. His rise to leadership was gradual but increased in responsibility after he successfully overcame each challenge he faced. There is no indication in the scriptures that David ever aspired to leadership, but there is a sense that David modeled a “bloom where you are planted” mentality; whatever David was in a position to do, he wanted to do it well. In choosing David, God explained to Samuel the prophet that even though his outward appearance was not that of a great leader—as had been the appearance of King Saul—his heart was pure (I Sam 16:7).

As a shepherd boy, David did most of his work in secret and out of view. God, however, knew the integrity of David and the great dedication he brought to fulfilling uninspiring duties. We are allowed a glimpse of how seriously David took his responsibilities as a shepherd in I Samuel 17:34-37 when he described to Saul how he had saved one sheep by killing both a lion and a bear. This may seem insignificant to some but David could have allowed this sheep to be killed. Who would have noticed, or even cared, for one sheep missing from the flock? Saving it seemed a reckless thing to do at the risk of your own life, certainly no one would have judged David poorly for choosing his safety over this one sheep, but David placed high value on it out of his strong sense of responsibility to protect it. God knew there was no better person to shepherd his chosen people than a man who was willing to risk his life for something seemingly so insignificant. David’s character was not completely unnoticed among his peers, which led to his first opportunity serve (I Sam. 16:18-19).

The failure of Saul in his duties as king (I Sam.15:23) had brought the judgment of God upon him and his reign. Removing His spirit from Saul, God allowed an evil spirit to torment him. Seeking relief, at the recommendation of his servants, Saul enlists David to comfort him. When David is called before King Saul to play his harp, we are given some understanding of why David is growing in esteem. While David is noted for being a talented harp player, mighty and valiant, a man of war, and prudent in matters, he is more importantly recognized as a man close to the Lord (I Sam. 16:18). King Saul experiences this in a personal way when David is able to ward off the evil spirits that torment the king by playing his harp. David’s presence so soothed King Saul that he co-opts David for service in the palace. The scriptures are quiet concerning this service but it is clear that his spiritual strength was recognized as something that set him apart.

David’s success in this test, and the leadership abilities that he developed through this event, afforded him more opportunities of increasing importance and difficulty. Each future trial met successfully by David strengthened his credibility and reputation among his peers as a strong, dedicated, and committed leader. It is perhaps this reason, coupled with the demonstration of David’s spiritual strength, which compels Saul to take a risk on the young warrior and allow him to confront Goliath. It was indeed a great risk. Having only experience as an armor-bearer (I Sam. 17:21), David was untested in warfare.

In the account of the Israelites confrontation with the Philistines in I Samuel 17, after serving in the palace, David had returned to his father’s home to tend his sheep while King Saul encamped by the battlefield. When he is instructed by his father, Jesse, to take provisions to his brothers serving in the army, after arriving at the sight of the conflict, David hears the bold challenge of the champion of Gath. Seeing the fear in the men of Israel, David is perplexed by their unwillingness to confront the “uncircumcised Philistine,” reminding Israel that they are the army “of the living God.” David’s boldness to publicly express his thoughts may have angered his brothers (I Sam. 17:28) but the report of his courage gained him an audience with the king (I Sam.17:31).

Before King Saul David expressed his willingness—and his responsibility—to defend his nation and his God, bravely offering his skills in answering the challenge of Goliath. Saul was understandably apprehensive at first, but it is David’s strength of faith in God, illustrated by the killing of the bear and lion, a faith that has also been witnessed by Saul, which prevails upon him to send David forth into battle as the representative of the armies of God. David’s victory over Goliath becomes renowned and serves as the catalyst to greater responsibility in the service of Israel (I Sam. 18:5). Further successes in battle only cemented the following he had already earned with his people (I Sam. 18:6-7). But these successes were realized because of David’s willingness to act responsibly in those opportunities as they were presented to him. His sense of duty was great but, peculiarly, there is no indication in the scriptures that David sought these positions of great responsibility and influence; he simply responded to the need before him. This ongoing cycle in David’s life would prepare him for the trials he would face as Israel’s king, both as a leader in exile of a kingdom in turmoil and as a leader who finally unites the kingdom.

The notoriety gained from his success, however, alienated him from Saul, who became consumed by his jealousy of David, placing his life in danger. At the hand of Saul, David endured many attempts on his life—driving him into exile. David adapted to these predicaments by organizing and leading a ragged band of malcontents through the wilderness, men of arguably questionable character, because they seemed to be his only supporters (I Sam. 22:2). Though he dealt with many disgruntled personalities, David still was able to unify this group—even increasing their size and loyalty (I Sam 23:13). This served as good experience for a man who would soon have to mend a divided kingdom after the death of Saul. David’s capacity to rally troops to his cause was learned from the experience of his past opportunities and the reliability that brought with it. They were willing to stand with him because he had shown himself a capable and faithful leader.

Eventually, David defeated the forces of Saul, and those loyal to him, and was crowned king in Judah. It would take seven years, however, before David could unite the kingdom of Israel, time David took to increase his position and influence. David’s respectability as a leader positioned him to unite the kingdom of Israel and, with the blessing of God, set it on a course of great prosperity. Because he had been faithful in little, God had entrusted him with much.

We must unapologetically confront our societal challenges with moral clarity, with--as the founders said--a “firm reliance on the protection of Divine Providence.” Tim Lajoie is a graduate of Boston Baptist College, Liberty University, and Liberty Baptist Theological Seminary. He lives in Lewiston, Maine. A U.S. Coast Guard veteran, Tim is a retired law enforcement professional with 30 years experience in law enforcement and corrections, with over 10 years in various management capacities, ending his career as a sergeant. He now works in EMS communications and serves as a police chaplain. He also does private consulting. He has earned a M.A. in Management/Leadership Studies, M.S. in Criminal Justice, and M.A. in Theological Studies. He has completed doctoral coursework in theories of crime. He is a former adjunct professor of social sciences and a former Lewiston, Maine city councilor. He has been married 30-plus years to his college sweetheart, he has two grown children (daughter and son), and five grandchildren. View all posts by Tim Lajoie